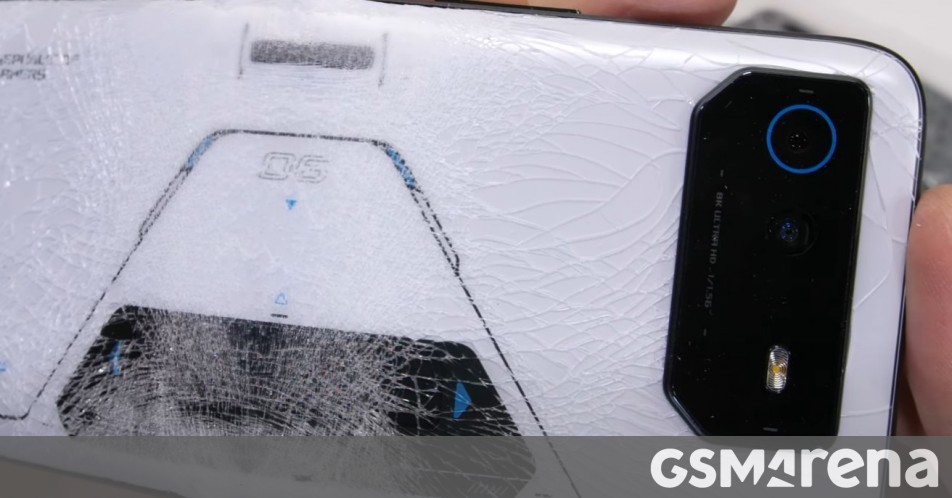 Earlier this week, the Asus ROG Phone 6 Pro was subjected to what is now a traditional bend test on YouTube and did not live to tell the tale – snapping in half no less. That’s a similar story to what happened to the ROG Phone 5 Ultimate last year, so it’s not overly surprising, but still – most phones that go through the same bend test survive.

So what gives? Why did the ROG Phone 6 Pro give in? That’s what today’s teardown video wants to explore, while also giving us a look at the phone’s insides.

The thing that stands out the most is a weird hole in the middle part of the phone, which represents a passthrough from the back glass to the vapor chamber beneath the screen. This is probably a way for heat to go out and not much else, though it definitely can’t help add structural integrity to the middle of the phone, where it needs it most. The motherboard is stacked, and the thermal paste is blue. The two batteries are connected to each other by a permanent ribbon.

As hinted at by the durability testing video, basically the most durable part of the phone is the screen glass – that Gorilla Glass Victus clearly is no joke. In the (understandable) service of gamers, Asus went with a design that places a second USB-C port on the side, which is probably what combines with the aforementioned heat transfer hole and the power button hole to introduce enough structural fragility to make the ROG Phone 6 Pro easier to bend than others. Using a solid case will probably alleviate all of this, however.