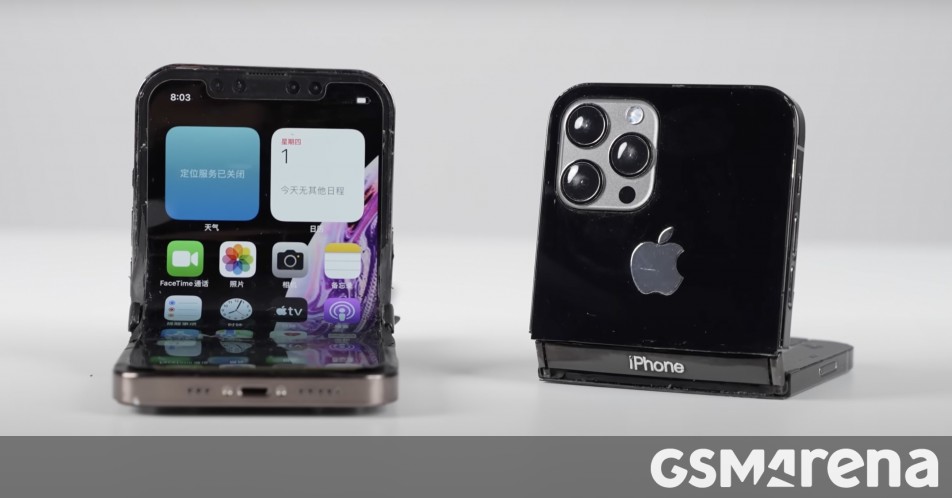 Apple has been rumored to enter the folding phone race for a while but early reports suggest that’s at least a couple of years away at this point and it might not even be an iPhone but an iPad tablet device.

Instead of waiting for the folding iPhone from Apple, the team over at Tech Aesthetics decided to venture out and create a clamshell foldable out of iPhone X internals and the chassis of a Motorola Razr 2019. The resulting device is called iPhone V and took nearly a year of hard work, reverse engineering and multiple trial and error instances to complete.

The team behind the project took an iPhone X screen and gutted out the glass cover and 3D touch layer while leaving the flexible OLED. The process was far from simple and required delicate maneuvering, advanced machinery and a total of 37 iPhone X screens before they had a usable one.

The project also involved a pair of Motorola Razr 2019s which were taken apart to accommodate the iPhone X internals. The team built a custom motherboard with 3D-printed components. Sacrifices had to be made due to space restrictions and the phone ended up with a 1,000 mAh battery cell which sadly does not support wireless charging or MagSafe.

With the hardware side out the way, the Tech Aesthetics team started tweaking iOS to better suit the folding screen with jailbroken mods. The finished device supports split-screen instances of apps and can use both sides of the folding display.